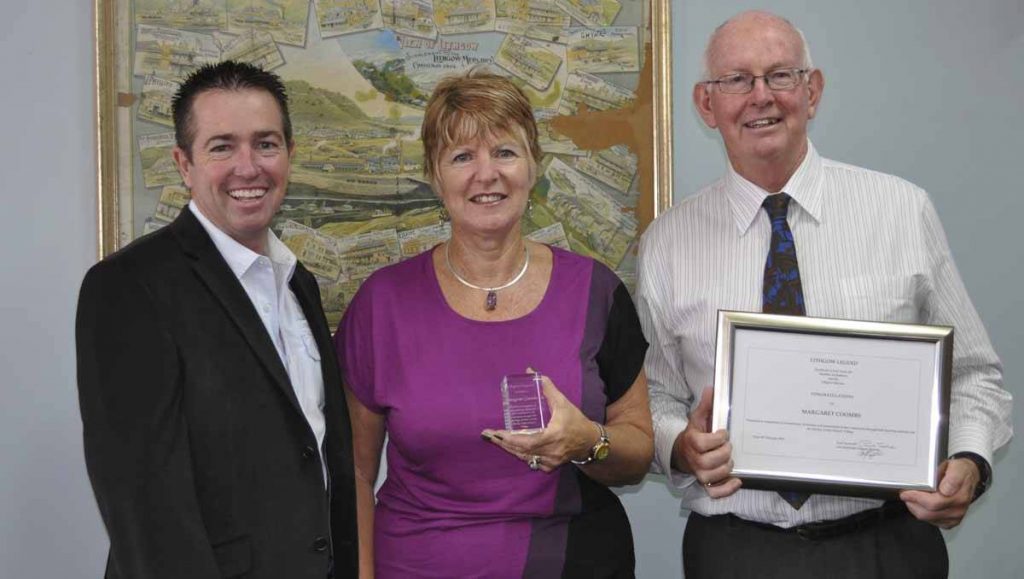 For the first seven years of the Western Region Academy of Sport, Margaret Combs OAM was responsible for crafting the vision and direction for regional athletes.

Working alongside inaugural board members David Berry former Bathurst MP, Neil Donohue the former director of the school of education at Charles Sturt University and Neville Goldspring from the NSW Office of Sport, Combs set about crafting pre-elite sports pathways from scratch.

Having served as David Berry’s electorate secretary prior to joining the academy, Combs understood early on the vision for what the academy could achieve and loved the hands-on aspect.

“I loved my time with the academy because at the end of the day you felt good about yourself as it was such a rewarding job,” Combs said.

“My mind was just buzzing with potential opportunities and the sky was the limit and there was nothing stopping us from planning stuff in the future,”

With no initial budget for supplementary office staff, there was an early reliance on coaches during the formative years of the academy.

Combs’ strategy though was to ensure all the academy’s sports programs staff were upskilled in their craft.

“When we first got started, we definitely had a look at what was needed in our area, and what sports needed proper pathways,”

“The long-term goal was to always make sure the athletes could succeed and in order for that to happen we had to have good coaches,”

“So to keep our coaches, we had to look after them with resources or opportunities and after that everything took care of itself,”

The first academy cohort in 1991 started with 57 athletes and 9 coaches. Over the next six years, Combs would add another ten programs growing the number of academy athletes to 189 and coaches to 32 by 1997.

Combs said the growth of the academy and the programs offered came from the mantra that the programs had to provide quality to the athletes.

“We got lots of sport wanting to come in, but the viability of programs was governed by how much funding we had, so I would put together a report for the board and breakdown the success of each program,”

“This was in order to maintain the quality for each sports program and to ensure the quality of the pathways benefitted everyone involved,”

The positivity and intrigue around the formation of WRAS also saw Combs become a weekly media contributor to the Dubbo Daily Liberal and local WIN and Prime 7 broadcasts.

She added it was great to see that the growth of the academy allowed regional athletes to progress into higher pathway systems.

“The athletes were dedicated and recognised the opportunity WRAS presented to make the next level in their sports. So, it helped for some of these players to overcome those barriers and made a huge difference to getting athletes through the grades,”

Although not all athletes made it to the next phase, Combs loved the way the academy athletes gave back to the local level.

“The level of the academy each year was able to improve because we had former athletes go into coaching and you could notice the improvement of local skills, which was another goal of WRAS,”

“We were proud of the fact that we were able to assist local clubs where possible and most importantly ensure athletes were enjoying themselves,”

Combs was also influential in working with the other regional academies to launch the Academy Games concept and was sought out to help set up other academies.

Stepping down from the academy in 1997, Combs said she felt the time was right to regenerate the academy.

“I loved working with all the stakeholders, but I just felt like the time was right to get someone new into the academy who would bring new ideas and a fresh approach to the academy,”

For her service to sports administration, Combs was the 1997 NSW Chapter winner of the Australian Society of Sports Administrators Award.

Her services to sport, National Parks and Wildlife Service and the fire brigade, were further recognised with an Order of Australia in 2015.

Thank you, Margaret, for all your hard work during the formative years of the academy, we are extremely appreciative, and we would not be here without your efforts.