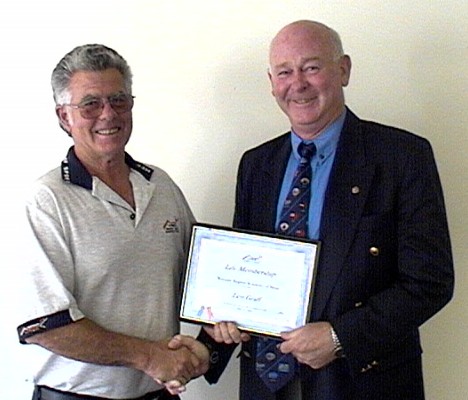 Joining the WRAS board in 1993, Len Graff left a legacy of financial stability and direction for the academy.

Bringing a wealth of knowledge from his chartered accountancy business, Graff joined WRAS wanting to help the development of regional athletes.

“When the academy was in its most formative years, the then Bathurst State MP David Berry invited me to be on the committee,” Graff said.

“I was impressed with the concept of the academy as it really appealed to me as it was all about making better individuals by teaching them life skills and developing their sporting abilities,”

Overseeing the academy’s finances until 2004, Graff brought a wealth of governance knowledge.

Having a 37-year association with the Lions Clubs and being the President and Treasurer of the Bathurst Harness Racing Club, Len knew the importance of ensuring the academy’s financial future.

“In the early years it became really important to secure the academy’s financial future as we were reliant on the support of the NSW Government, Charles Sturt University, several Bathurst and other regional clubs, athletes’ parents and volunteers,”

“Our aim was to build a reserve of funds so we could remain operational for one year if anything were to happen to that support,”

A strategy that is still implemented today this financial awareness was important in helping to set up the inaugural Lone Star and Para Sports programs and advancing the abilities of the academy.

“I was very proud of the early work we did as it set the ground for the academy to advance over these incredible 30 years,”

“It is incredible to look back and see that I have contributed to the rich history and success of celebrating our incredible regional athletes,”

Graff was recognised by the academy and inducted as the first WRAS Life Member in 2004.

Following his commitment to community sport which also featured a tenure with NSW Harness Racing Graff was also awarded an OAM in 2017.

We thank Len for his contributions and the impact he had during the formative years of our academy.