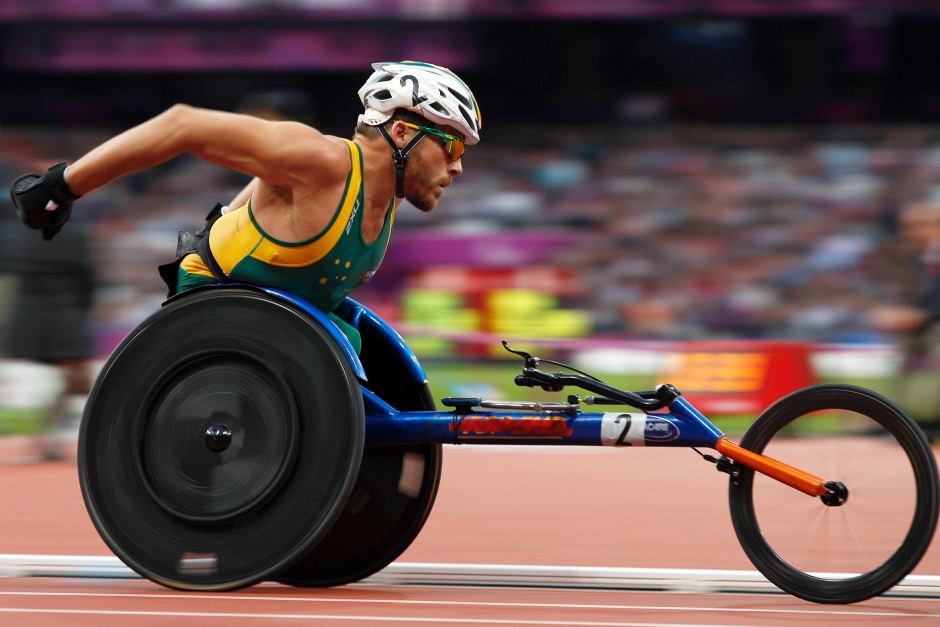 Kurt Fearnley at the 2012 London Paralympics

For twenty years Kurt Fearnley has been an icon of Australian sport.

Marathon wins, conquering Kokoda and being a vocal advocate for disability awareness have been just a handful of Kurt’s personal accomplishments.

But the journey from Carcoar to becoming a multiple Paralympic and Commonwealth Games medalist, was not an easy road.

Fearnley was driven by a desire to become a wheelchair racer as a child after a televised event sparked his passion for the sport.

He quickly made a name in junior sport joining the Western Region Academy of Sport in 1997. For 12 months in the academy, he honed his craft before a move to Sydney for a university teaching degree and full-time athletic pursuits called his name.

The move paid dividends, with Fearnley making the Sydney Paralympics only five years after starting his wheelchair racing career.

Claiming two silvers at Sydney, Kurt made his mark at the 2004 Athens Games securing gold in the 5000m and marathon events.

For his efforts in the Sydney and Athens Paralympics and securing three straight New York Marathons, Kurt was inducted into the WRAS Hall of Fame in 2007.

Although Kurt retired from wheelchair racing in 2018 after taking home gold at the Gold Coast Commonwealth Games, his journey has continued to inspire athletes including 2022 Para Sport athlete Waryk Holmes.

“I’ve watched Kurt since I was 18 months old and to follow in his footsteps at WRAS is an amazing opportunity for me as he was the one who put me into a wheelchair racing for the first time and told me to go for it,” Holmes said.

“Kurt is the ultimate athlete to me as he has personality, skill, strength and leadership. He has shown me that being a great athlete isn’t just about your racing skills but also about how you treat people and what you do with the opportunities afforded to you,”

WRAS Executive Officer Candice Boggs said that Kurt’s journey is a testament to the mission of the academy pathway.

“Kurt’s rise and abilities shows that there is true potential amongst our regional athletes and the WRAS pathway is set up to ensure athletes regardless of their situation or circumstances have an identified pathway to pursue their sporting ambitions,”

Thank you Kurt for being a pillar to showcase the potential of the Western Region Academy of Sport.