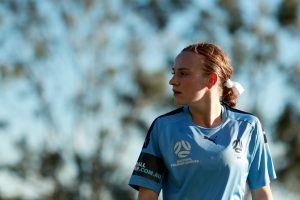 Joining the academy from 2019-2021, Rue has proven to be a standout football athlete committed to making the national competition.

Over the past four years, Rue has travelled to Sydney three to four times a week for training and matches with the National Premier League side, Football NSW Institute of Sport.

She is set to join the Wellington Phoenix during pre-season training this month when the team are set to arrive in Australia, an opportunity she is excited to start.

“I just think training with other professional players, being in that professional environment as a player I will definitely develop,”

“I am just so excited, obviously it is overwhelming to start with, and it is surreal, but I’ll just embrace the experience,” she said. 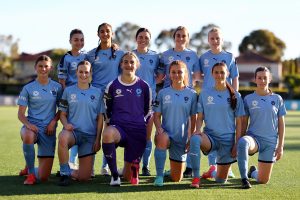 Cushla Rue (second from left bottom row) with 2021 Football NSW Institute of Sport during Round 10 of the National Premier League. Photo: Jeremy Ng

Her progression into the A-League reflects the dedication and talent she has developed over the years.

In 2021 alone, she was selected into the future Matildas squad, nationally identified as a top 50 female Australian soccer player and received an invitation to the Opens Age group Matildas Women’s Talent ID Camp.

Having scored 19 goals over 75 matches for Football NSW Institute of Sport, Rue has proven her talent in the National Premier League, one level below the A-League.

Cushla described the support networks available to her as ‘a great asset’ thanking WRAS for their support during her time with the academy.

WRAS Executive Officer Candice Boggs described Rue’s achievements as a testament to her and the talent that exists in the western region.

“In her time with the academy, Cushla used every strength and conditioning session to improve and she has just proven that if she can do it, anyone from the regions can do it as well,”

We wish Cushla all the best in the upcoming season for the Wellington Phoenix and cannot wait to see her run out soon.